Neymar is happy to let Messi take free kicks for Barcelona but sees himself taking over as the main set piece specialist at the Camp Nou.

In speaking with ESPN Brazil, he said, “I keep practicing them at Barcelona, with the national team too. I try to always improve with the free kicks, to be ready at any moment to score goals. But everyone knows he’s the man here at Barcelona — in a good way — he’s the guy who takes them. When he stops, I am ready.” 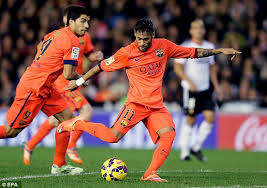 There has been debate recently as to whether Neymar should share dead-ball duties with Messi given that the latter missed another penalty against Levante as Neymar scored a beautiful free kick against Atletico Madrid for a 2-1 win.

Until now, Messi, who is 28, has been in charge of these dead-ball situations despite having a number of experienced and successful free kick takers such as Rakitic, Xavi, Iniesta, Suarez and Neymar himself.

He also said that Messi is the most natural taker since he has already proved this by scoring a lot of goals for Barca not forgetting the two free kicks that he scored against Sevilla during the European Super Cup.

He also revealed that he thinks about winning the Ballon D’Or and being the world’s best player but for now wants to be just nominated to the podium for the 2015 ceremony to be held in January.

Of course, Messi is the favorite to win a fifth award as the world’s best player given his performance that led to Barca’s treble last season