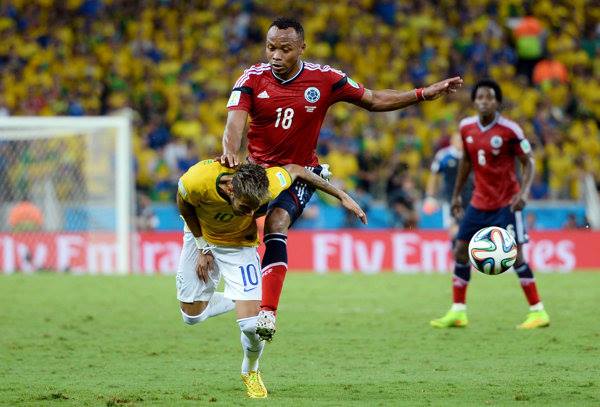 People somehow think that in soccer that the player needs to be injured before a foul is committed or that the player needs to be hit hard and that players should just stand still and let cheating defenders take whacks at them without evading (flopping/diving.) The game is getting more violent and less beautiful, even down to the Sunday league level due to the influence of English soccer and the trickle down effect of the EPL. I’ve been reading the comments around the Internet about Neymar’s injury and these (English and American mostly) soccer fans need to have their heads examined. Let me make it clear: it’s cheating to foul a player and diving is only self preservation. It sickens me to see the mostly English/American fans (yeah you know who you are) and media take pride in the injury to Neymar who is one of the best creative players in the world.

Then you have people like Suarez. I just wished the refs would watch instant replays to see what went on when they missed something.  They used replay to ban Suarez but no replay to ban Zuniga. Suarez’s victim got a little booboo, Zuniga’s victim got a bed in a hospital. If you do the math you see that the creative players who are BETTER than Messi at the international level are being eliminated before and during the world cup followed by a media blitz to brainwash you and reinforce the situation. Just read how many times there is an article that says something like “Nemyar broke ‘his’ back”… he didn’t break his back Zuniga broke it! Or “Neymar suffered a hard challenge and brok his back.” Totally obvious to me what’s going on by examining the results instead of getting caught up in the smokescreen.

Oh, yeah, and they didn’t miss it. You’re telling me that one main ref, the two linesmen, and the assistant ref couldn’t see a player jump 3 feet in the air on top of the world’s best player? I saw it because the player in yellow got body checked worse than a hockey foul.