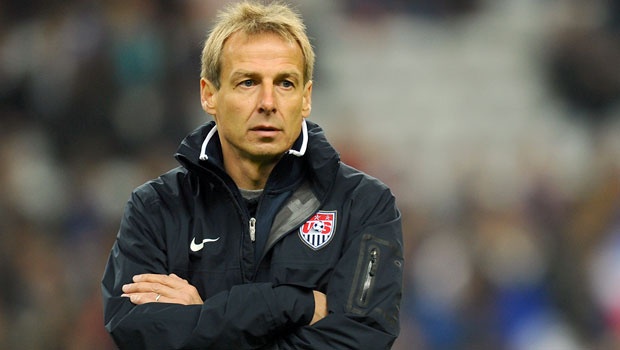 Jurgen Klinsmann famously said he booked his plane ticket back to California after July 13, the date of the World Cup final. It was a sign of his belief in the possibility. Instead he leaves on July 3.

“I changed the flight [Tuesday night],” he said here with a laugh.

There may be no bigger winner coming out of U.S. Soccer’s dramatic and closely followed World Cup trip than Klinsmann, the charismatic, telegenic, German-born, Orange County-relocated national team coach and technical director. 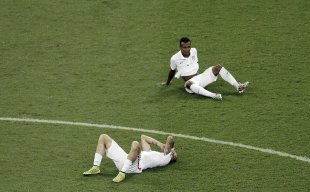 United States’ Geoff Cameron, left, and Julian Green sit on the pitch after the loss to Belgium. (AP)

He is a bona fide star now, recognized and respected in a way no soccer coach has ever been in the United States. That the Americans fared no better here than in 2010 – eliminated in the round of 16, and this time in a less competitive game – hardly matters.

Klinsmann is the king of U.S. Soccer. It’s inherent that U.S. Soccer capitalizes on it.

If nothing else, this is why the decision to contract Klinsmann through the 2018 World Cup in Russia makes sense. The U.S. needs a plan. It needs direction. It needs a voice that he will now speak with unquestioned authority to the next generation of players and their coaches, well aware that his directives will be followed.

Maybe Klinsmann’s grand plan to turn the United States into an elite program is a pipe dream when there are so many athletic options for kids. It’s worth finding out, though, because if not him, then who? If not now, then when?

“We built a lot through the last two to three years,” he said of the efforts made since his hiring. “It’s working. But with every aspect of player development, there is work to be done.”

Klinsmann, 49, leaves Brazil with mixed results at this World Cup.

His players competed with tremendous heart and motivation – “a team that went to its limits,” he said. It found ways to remain in games it was outclassed, creating opportunities for victory that lesser-willed teams wouldn’t have. There were some promising, if brief, performances by young talent such as DeAndre Yedlin and Julian Green.

There remained issues, though. He failed to get his players to embrace a more aggressive, attacking style and seems mystified at his inability to make that happen – “I think it’s a mentality we have to break through,” he said – and his offense was incapable of creating sustained chances, let alone many goals.

And, of course, in the end his team did no better than Bob Bradley’s four years ago. It still won just a single game. Klinsmann understands the focus on the short-term results.

“We get benchmarked at the World Cup,” he said. “So there’s definitely stuff we need to improve.”

The question isn’t solely whether he can do it. It’s whether anyone can? If nothing else, this unique moment, the combination of a coach who thrives in the spotlight and a glare that hit record levels from adoring fans, makes this a powerful moment of opportunity for U.S. Soccer..

Perhaps now the messages he tried to pound into his adult players – self-confidence, aggressiveness and the importance of nutrition, fitness and mental preparation can find a younger audience that will change the way it views individual development and change the long-term course. Perhaps we’ll move past the plan of hoping the country will one day produce a truly elite player.

“I believe it is more a mental topic we need to work on than a talent one,” Klinsmann said.

He works in direct concert with all of the younger national teams, having their coaches on his staff. During his wrap-up press conference here Wednesday at Sao Paulo FC, he mentioned, at various times the Under-17, Under-18, Under-20 and Under-21 clubs. He said he is familiar with each player on each team. He said he is hands-on in plotting out their improvement.

“Connect the dots,” he called it.

This is the Jurgen Show now and his smiling ways covet just that. When he first came to America in the late 1990s, he was so anonymous, despite his star turn on a West German World Cup champion, that he played on a low-level club team outside Los Angeles under an assumed name. Rarely did anyone recognize him.

Now the whole country knows who he is – kids, elite teenage players, coaches at all levels, fans, media, sponsors, whatever. There’s never been someone like him to generate mass, mainstream attention, fan excitement or corporate funding.

Everyone wants to know what he has to say. Everyone wants to follow him to a brighter, better day. That includes two major tournaments in the States (2015 Gold Cup, 2016 Copa America), plus the 2016 Rio de Janeiro Olympics to remain front and center and continue to cultivate support.

Everything is available now in a way it never has been before for the sport.

“We will try to push through,” he promised.

He’s got four years to make it a reality.