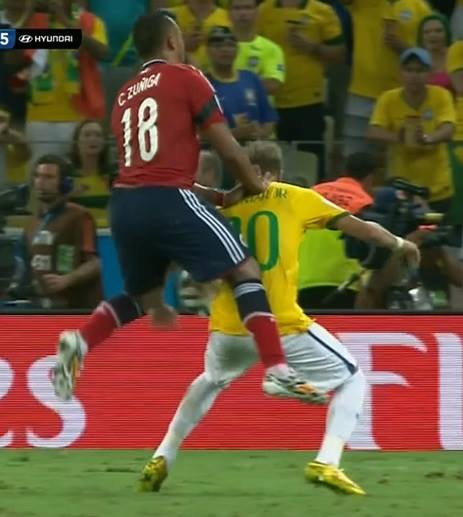 I think there is a conspiracy going on this World Cup, but again maybe it’s not just this one. My thinking is this: Nike and Adidas are at war. Nike has overtaken Adidas’ strong hold on soccer and Nike has invest hundreds of millions into Brazil’s team. You have Nike (Brazil, Holland, USA, England) teams vs Adidas teams (Argentina, Colombia, Germany, Mexico). FIFA has to play mediator to these two sporting corporation giants. I’ve never seen so many injuries pre-world cup or during the world cup. I’ve also never seen so many players actually on top of a players shoulders like I have in the games Mexico-Brazil and Columbia-Brazil. Then you have the influences from Brazil and their people and you have the drug lords influence for Colombia. You also have to see how they trade off champions league wins, world cup, euro wins between countries.

So the foul you saw against Neymar can bee seen as an Adidas player breaking the bones of a Nike player. They want Brazil to make the semi-finals but not the final and they want Messi to legitimize himself as the world’s best but he really isn’t. He plays like crap against top national team players which can been seen by the fact that Clint Dempsey has a higher goals per game average in the world cup than does Messi, so do many other lesser hyped players. So FIFA want Argentina to win and Germany to place 2nd and Adidas want Germany to win and Argentina to place 2nd. Brazil has had their fair share of stars and world cup wins so FIFA only wants them to make it to the semi finals that’s why the referee was so weird in the game against Colombia and the yellow on Silva was really just a foul, but not a yellow.

The referee is simply trying to get as many Brazil players injured and suspended as possible before the Semi-final game so they don’t make it to the final. The referee was probably told before the game to let it all go so that many Brazil players will get injured then Columbia is told to foul like crazy. Columbia made the first foul in the game at just 57 seconds and they couldn’t even play the ball out of their own half. Brazil was getting really good and dominant again. If you actually count the non-calls against Brazil in that game you’ll see that it was Colombia that was actually the dirty team, but the referee team let go the Colombia fouls and then Fifa runs this massive press campaign talking about how brazil is a dirty team and Neymar deserved to have his back broken saying things like “Neymar broke his back”. Not to mention the match fixing allegations that are already being reported about by mainstream newspapers. It’s not just Camaroon who’s fixing matches. The corruption goes all the way to the top.